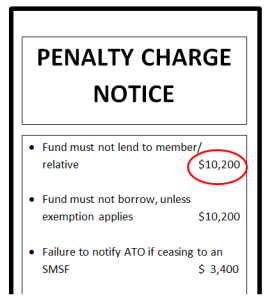 As you may aware the parliament has passed the new penalty regime for Self-managed Superannuation Fund (SMSF). Under the new legislation, ATO will gain the power to issue on the spot fines, directly and personally, to SMSF trustees using a range of penalties to match the seriousness if an offence.

The new regime also increases the penalty unit from $110 to $170, or increased by 55%. ATO has indicated that each reported offence will automatically generate a penalty notice on each trustee.

This will put individual trustees to a disadvantage situation compare to a corporate trustee, as each trustee will bear the fines individually.

Trustee(s) may apply to waive the fines. ATO may waive or reduce the penalty based on past history and seriousness of breach. ATO also may order the trustee(s) to:

• Rectification direction (sec. 159) – a written order by ATO to trustees to correct their wrong-doing within specified time period. For example, ATO may direct trustees to sell their property (if they were not prepared to this voluntarily).

• Education direction (sec. 160) – a written order to trustees to attend a specified course of education within a specified time period.

Below is some penalty guidance that may be imposed by ATO: